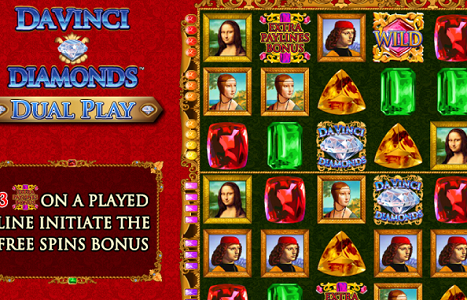 Da Vinci Diamonds is one of IGT’s most famous online slots, so when a follow up game was released, it was hardly a surprise. Da Vinci Diamonds Dual Play is the sequel to the original game and is also available for play on smartphone or tablet, making it even more accessible than ever before.

Instant Play and Download versions are on offer and players can choose between free demo mode and playing for real money and the chance to win big.

Da Vinci Diamonds Dual Play has greatly improved on the original game and added extra paylines and enhanced graphics. This online slot follows the 5×6 format and is technically 2 slots games combined into one. This bigger, better and brighter follow up to the original offers more winning potential and enhanced action that keeps players coming back for more.

A closer look at the Da Vinci Diamonds Dual Play slots will reveal that IGT has been incredibly clever in the production of the game. All they’ve actually done has been to put the original Da Vinci Diamonds game one atop the other and let the famed Tumbling or Cascading Reels go through to the reels below.

The Da Vinci Diamonds Dual Play online slots game makes use of the same symbols as the first version of the game, only they are doubled up. Famous paintings by the grand master himself, including the Mona Lisa are depicted on the reels, along with sparkling gems and diamonds that could line up on any spin to create a winning combination.

The Wild and Bonus symbols are labelled as such and not much imagination has gone in to making these unique, but since they trigger big rewards this shouldn’t be a concern.

The reels are ensconced in an ornate, gilt frame and the rich colours add to the luxurious and rich visual quality. The soundtrack is a soothing harp, which speeds up a little in tempo when a winning combination reveals itself on the reels.

Da Vinci Diamonds Dual Play free spins feature is slightly easier to trigger than in the original version of the game and regular wins are rewarded to players who manage to activate this bonus on an on going basis. When the free spins bonus is activated 6 free spins are rewarded and the two games merge completely, to become one giant slot with enormous payout potential.

The original version of the Da Vinci Diamonds game was one of the first ever to boast the Tumbling Reels feature. In this feature, after a player has successfully lined up a winning combination of symbols on an enabled payline the symbols will explode and vanish, with new symbols raining down from above to form another potentially winning combination. This means that all winning paylines have an added chance of an extra win and essentially are like a free spin, only more exciting to watch. This feature can lead to cumulative wins that can run on for several rounds and there’s no limit to how long they can continue racking up rewards for.