EssNet is an Internet network project put in place by the European Union in September 2002. The EssNet was commissioned due to the need to create a system of balance in regard to the European Statistical System. The order for the EssNet commission was first put forth by the Director General of NSI. After the proposal, a number of organisations have worked together to create a network that fully supports the EssNet project, with a final projected outcome of a total connected network across the entirety of the European Union and all associated countries.

During September 2002, a panel of officials decided to put together a task force that would handle the implementation of the EssNet network. This task force is known as Cenex. Cenex is still in operation, working to further the EssNet and related projects until they are completed. Cenex has a number of priorities in regard to the future projected systems. The first is to detail the relevance of the objectives of the Statistical Programmes. Contribution toward the innovation and sharing of knowledge regarding the Statistical Programmes. Achieving a degree of excellency with all projects involved. The continued sustainability and growth of associated projects and their relevant outcomes.

There are seven main criteria required in order for the EssNet project to be deemed a success. The first is to involved several partners and certain results in relation to the project. Next is to focus on any and all issues that are directly related to the European projects. The projects in question are aimed to be completed within a 5 year program. The projects must be cost effective, although some projects are excluded from these criteria as cost projections can change over time. The sharing of knowledge is paramount to the project, and knowledge should therefore be shared widely. Lastly, all actions of the projects must be carried out in the full capacity of the ESS organisations associated with said projects. 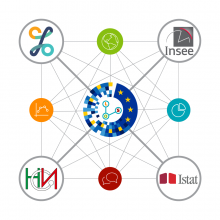 At this current time, there is an assortment of ongoing projects. All projects have estimated times of completion, and involve a number of different ESS organisations.

The first ongoing project is the DCSS, which is the Data Collection Social Survey. This is being used to collect information on various modes, and is designated to end within 24 months after its start. The second is known as the MEMOBUST, and is a study on statistical business methodology. Next is an analysis of current networks in place, including EU-SILC. This is to be completed within 48 months. One of the biggest on going projects at present is the Profiling initiative, where information about multinational enterprise groups is being collected. This project has been divided into multiple terms, with the first already completed within the allocated 48 months, and a second term of 13 months of additional data. Lastly is the MESH project, which involves the creation of a brief that displays the statistics for average energy consumption of households around the Union.